Get The C3 Connect App!

Free to download from the App Store and Google Play! 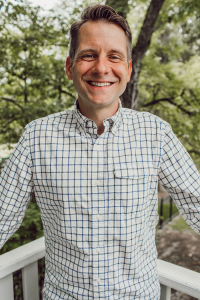 Ted and his wife Ami live in Wheeling with their daughter and two sons.  A Wheeling native, Ted watches over C3’s leadership development and is one of the preaching pastors.  As with the other pastors, Ted is involved with many pastoral duties in addition to his primary ministries.

Ted is a graduate of West Liberty University with a B.A. in Business Administration and received a Masters of Divinity degree from the Reformed Theological Seminary.

Ted served as a Youth Pastor at Daniel Memorial Baptist Church (Jackson, Mississippi), Senior Pastor at Park Baptist Church in McKeesport, PA and returned to Wheeling to start Redeeming Grace Church, with some local families, serving as the Lead Pastor. He worked for Wheeling Housing Authority during this time before joining the C3 staff in 2013. His vision has been instrumental in driving C3 to where it is today.

Why is C3 Special to you?

It's the people.  I have never been surrounded by such genuine, caring, and Jesus-loving people. When I found that at C3, I knew this is the place that I want my family to be.

Name at least two things you do very well.

I like to build things with my boys and I'm a homebrewer.

Name at least two things you don't do very well.

Sing (at least I'm told) and play basketball (the last time I did, I was on crutches for 9 months).

Tell us about one of the most fun things you've ever done.

When I was 15, I drove across the country with my dad.  It didn't seem fun at the time, but it's hard to recreated a memory-generating event like that in a lifetime.

If you had two hours of absolute free time, what would you do?

I'd probably spend it wondering what I'm forgetting to do right now.

What is the nicest thing anyone has ever done for you?

Tell us your favorites...

Place to shop: Old Navy (I love a deal)

Doubt is natural… Believers need to wrestle with the same questions that skeptics ask. Many believers "inherited" their faith and may have never asked these questions. Both doubters and believers have a moral and intellectual responsibility to examine their doubts and beliefs. C3 is a place that encourages this to happen. Learn more